Traditional architecture used to be about intricate home designs with hand-made ornaments and family heirlooms to embrace tradition. Nowadays, modern house architecture is streamlined to prioritize functionality and budget over tradition and intricacy.

These modern house architect styles stray from the more extravagantly styled homes like Queen Anne, Gothic Revival, and Victorian. That’s not to say that these modern homes can’t be elegant or aesthetically pleasing. This style typically consists of concise, clean lines accented by sharp and contrasting colors (primarily black and white).

When did the Modern Home Movement Begin?

Whenever this movement started, it revolved around the core belief that form should follow function. Therefore, the architecture industry is expected to put more work into making practical and usable builds rather than homes that look nice but are inconvenient and may hinder daily life.

While it may not have been the beginning of the movement, Louis Sullivan helped inject this thought process into the architecture community. Louis Sullivan designed several famous buildings for the Chicago World Fair in 1893. His ideas have become the basis for many architecture practices and other art forms.

Other architects that influenced the form and popularity of modern architecture designs are Frank Lloyd Wright, Staatliches Bauhaus, and Ludwig Mies van der Roche. If you recognize these names, it’s because even decades later, they’re highly regarded as the most talented architects to have designed anything for hundreds of years.

In the 1930s, this movement became officialized as International Modernism, or International Architectural Style. This specific sub-design followed an architecture exhibit by the talented Philip P. Johnson in 1932. Modern architecture is widely believed to have finished evolving in the later years of the 20th century when designers finished the last commonly known examples. 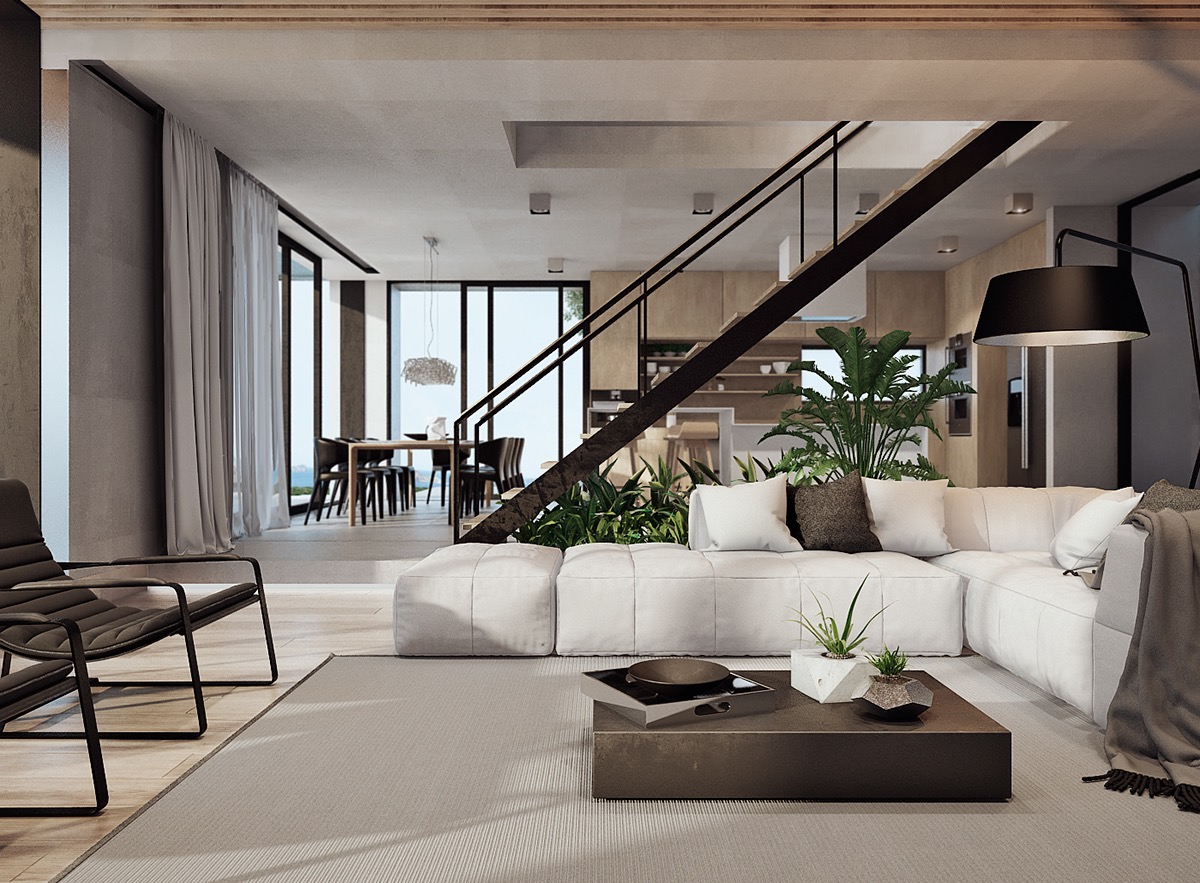 Clean and minimalist lines are a staple of interior modern architecture. They lack any unnecessary curves or designs, emphasizing the beauty of simplicity in daily life. They lack additional details or intricacies that most other design styles would include.

Open floor plans with clearly defined spaces are also a staple of modern architectural design styles. Modern architecture focuses on form over function, optimizing the available space within the home. Open floor plans allow increased opportunity for residents to design the interior of their house and make adjustments as needed for their lifestyle.

Modern architectural houses also tend to emphasize asymmetrical designs. Architects specializing in contemporary styles like to play around with large, smooth shapes arranged in an asymmetrically balanced design. This choice draws the viewers’ eyes toward certain aspects of a room and away from other, less pleasant-looking ones. 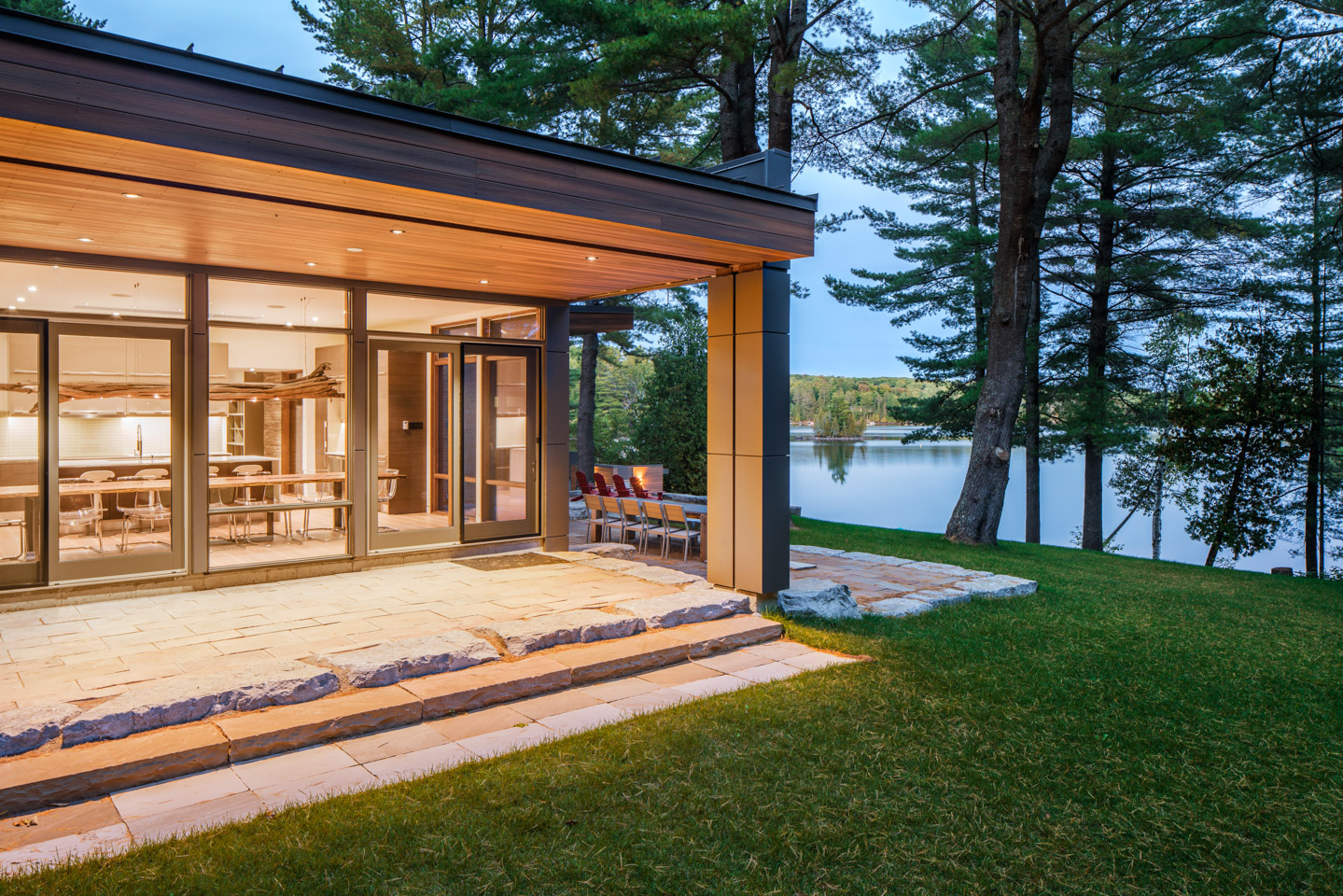 Large windows and glass walls are a common way that architects will provide light to areas in a modern style home without cluttering it by interior lighting. These large windows also embrace the significance and natural beauty of sunlight.

When building a modern-style home, architects are also encouraged to intertwine a relationship to the outdoors into their designs. The best and most famous example of this is probably Alex Jordan’s famous “House on the Rock,” which he once lived in, but has now been transformed into a museum of the weird and wonderful. (Despite what some say, House on the Rock is not a Frank Lloyd Wright build. Wright had no affiliation with the build or with Jordan.)

How to Get a Modern Style Architectural Home

While modern style architecture is often associated with designs by prominent architects, you don’t have to shell out millions of dollars to have your home designed. Instead, you can go to your friendly local design-build firm and work out a unique modern build.

If you want to have a modern home design without paying millions, go to a build team that has the know-how to get it done. Winthorpe Design and Build has decades of experience and a wide range of skills to bring you the design you want with the functionality you need. We know you’ll love our new process, which now includes remote consultation. Set up an appointment today!