Average Cost of a Bathroom Remodel in Maryland and Washington D.C.

The cost of a bathroom remodel depends a lot on the amount of work that needs to be done.

For instance, are we only redoing the fixtures in the bathroom? Or is it something much more extensive? For example, if we need to redo the plumbing or the electrical, make the room larger, or if we are relocating the toilet, bath, or shower, this is going to drive the cost much higher.

As you start getting into those details, the price of the project will go up. However, in many cases, it is easy to see how much value is added. Value can be gained on many levels, whether it’s updated functionality for you and your family, to add a touch of luxury and comfort for yourself, or to fix older problems before you put the house on the market.

In the case of a larger master bathroom, you may see costs of up to $100,000 if you are doing a full renovation, such as if you were adding a lot of additional space. What’s going to drive the cost is if the plumbing needs to be replaced or if we need to run new circuits.

One of the nicer features that we’ve been doing in bathroom remodels is hydronic floor heat. Additionally, when we do a bathroom renovation, we’ll often do a hot water (either tankless or tank) replacement to ensure reliable hot water supply. 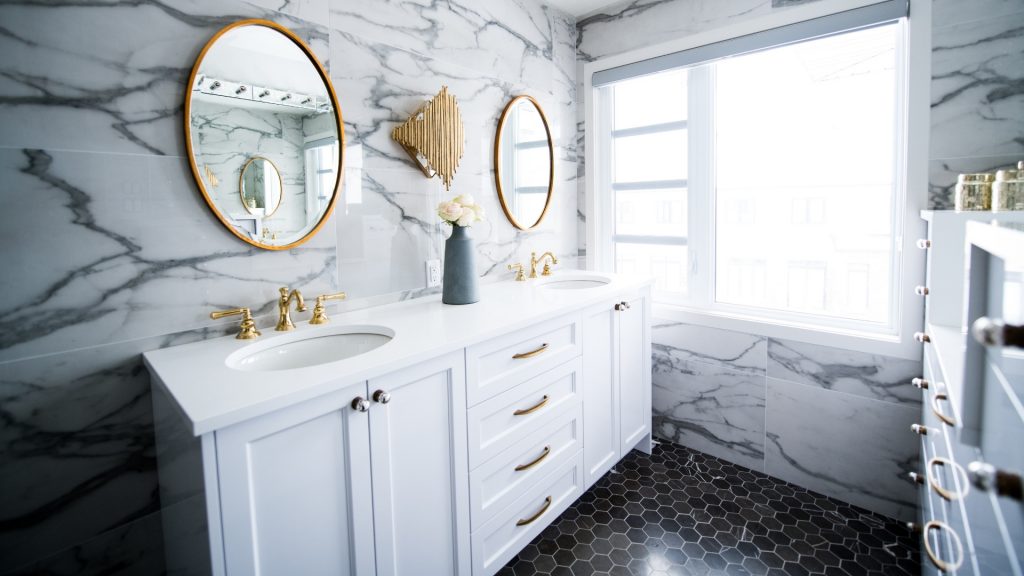 As you start adding those different things in, the job can get more expensive. But, you are getting updated functionality and improved efficiency, and if you’re staying in the home, this is something that you can enjoy for years to come. A bathroom doesn’t depreciate over time as a car would. When you do decide to sell, your bathroom will give you an excellent return.

Another feature that may drive costs up is shower panels, niches, that sort of thing. We recommend doing this, though, because it ensures that the shower, tub, and floor will not leak. Depending on the finishing materials you choose, it may drive costs up initially, but you will save a lot on maintenance down the road. We use them in all of our projects, both new construction and renovations.

One of our recent jobs was a renovation plus an addition to an existing master bathroom. We ended up incorporating some stained-glass windows from the church where our clients had been married and made it into a window frame. This became a focal point of the bathroom itself. Then we incorporated a steam shower on one side of the bathroom, which allowed them to use it as a regular shower and also as a steam shower.

We incorporated curved walls that wrapped around the vanity to complement a circular tub that was in the center of the floor. We found these European lights that give off the same light intensity of natural sunlight—a much more flattering and natural option—and incorporated them into the sides of the walls around the vanity. We also added a sound system that we then connected to the system in the rest of the house so the clients could listen to the news or music as they got ready for their day. 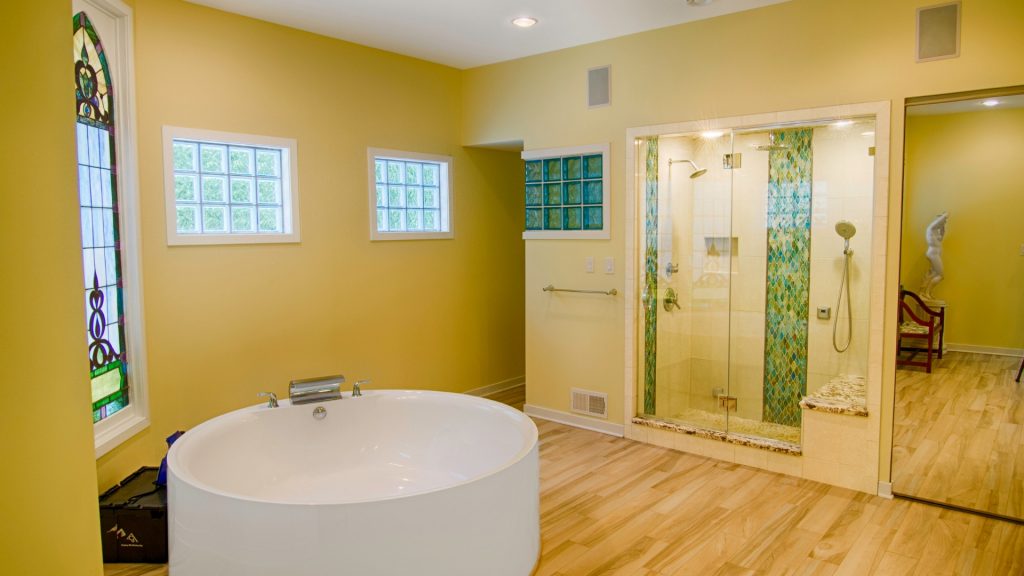 We went with a ceramic tile on the floor, a style that lends the look of a wood plank floor but is much easier to maintain than natural wood or your average ceramic tile.

As this was part of a whole-house renovation, we also did two semi-custom hallway bathrooms that backed up to each other. The first bathroom had exterior windows, and both had nine-foot ceilings. We went ahead and put glass block up high, which allowed natural light to come through into the other bathroom without the two rooms having to be open to each other.

Then, we added a skylight into the second bathroom to invite even more natural light. Between the skylight and the glass block wall, it made it feel like it wasn’t enclosed.

This project, all told, was about $85,000 in the end. One of the things that drove up the cost was that we had to put a new roof on it, which is how the whole project started in the first place.

It had a flat roof, and it was leaking. The water ended up getting into the floor, which ran down between the shower wall and the bedroom wall, which then started to rot out the floor. At first, the homeowners thought that it was just an issue of the shower leaking, and when we first looked at it, that’s how it appeared. As we investigated further, we realized that the water was coming in through the roof.

The roof was unsound. It had rotted right through and could have easily fallen in. That’s when we scrapped the idea of just redoing the tile and giving the bathroom a facelift and decided on a total renovation. This way, we could address the structural issues and make everything safe. In the end, it opened the door to what the client really wanted.

Initially, we sit down with the homeowners and go through their selections with them so that they understand the cost implications. For instance, there might be some more budget-friendly variations on an expensive tile that they like, so we can give them the look that they want, even though it’s technically not the same materials.

We tend to encourage our clients to choose items and features that are going to make their life easier over time. For example, the client may like a particular tile, but it might not be the best choice for the steam shower they want.

Are you thinking about a bathroom remodel for your Maryland or Washington D.C. home? Reach out today to learn more about how we can help.